An allergic reaction can also occur when the skin comes into contact with some substances, for example, washing powder, fabric softener, etc. In this case, the rash appears only in those areas that have been in direct contact with the allergen. Parental tactics, in this case, are similar to those for food allergies. Additionally, the substance that caused the reaction should be removed from the skin – rinse off under running water.

Now it is necessary to dwell on a large group of infectious diseases accompanied by a rash.

Chickenpox (chickenpox).
The appearance of a rash, as a rule, is preceded by mild malaise, symptoms of mild acute respiratory infections may be observed. Then a rash appears. At first, there is a little of it – a few red spots. Every day more and more new spots appear, and the old ones turn first into a papule – a “tubercle” slightly protruding above the skin, then into a bubble with transparent contents, and, finally, the bubble dries up and a crust forms, which after a while disappears. From the moment the first speck appears until the last crust falls off, about 10-15 days pass, during which the sick child is contagious. A chickenpox rash is common throughout the body, including the scalp and mucous membranes (mouth, eyes, genitals). The appearance of a rash with chickenpox is accompanied by itching, sometimes quite severe.

Rubella.
With rubella, the rash appears almost simultaneously throughout the body, but is more pronounced on the face, chest, and back. It looks like small pale pink spots, almost the same size. The rash is profuse. Disappears without a trace within 4 days. A characteristic feature of rubella is enlargement of the occipital lymph nodes. All this is accompanied by mild symptoms of acute respiratory infections. There is usually no specific treatment for rubella. But all children under 1 year of age are advised to be vaccinated against rubella. 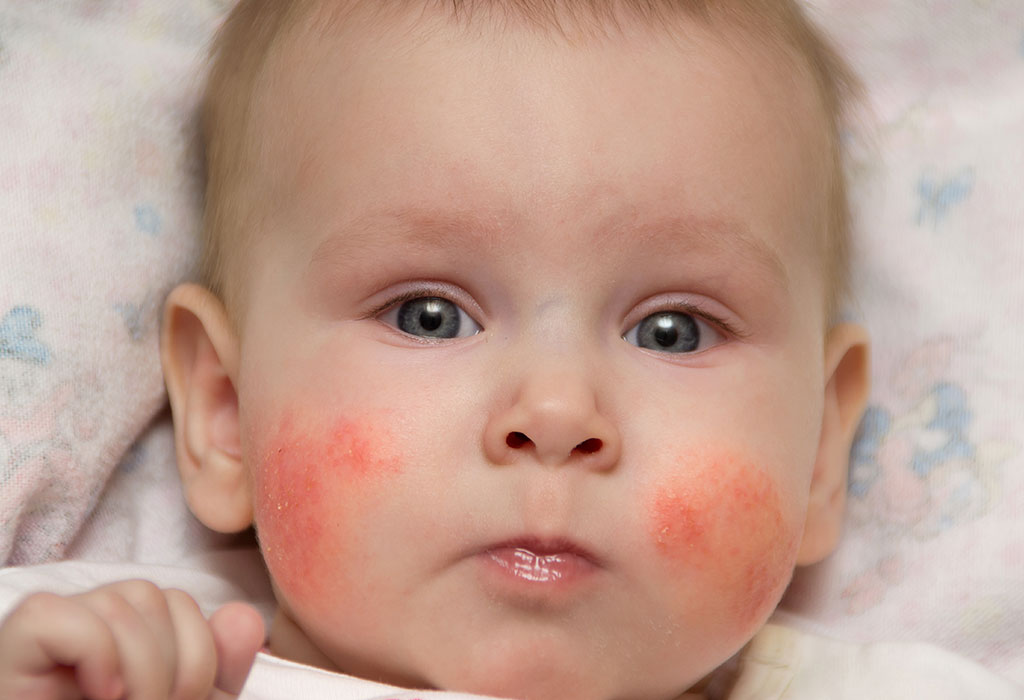 Scarlet fever.
The disease begins acutely with high fever, sore throat when swallowing, sore throat. At the beginning of the disease, the tongue is thickly coated with white bloom, then it becomes bright red, shiny. The rash appears a few hours after the onset of the disease on the trunk, limbs, with thickening in the natural folds of the skin (armpits, groin area). The rash is pink, pinpoint. At the same time, the area around the mouth remains pale. After the disappearance of the rash at the end of the first – at the beginning of the second week of the disease, peeling appears on the palms and feet. The disease is quite serious because leaves behind complications in the form of heart and kidney damage. Requires the obligatory prescription of antibiotics and the period of dispensary observation with the obligatory control of blood and urine tests.

Measles.
A rash with measles appears on the 4th-5th day of illness against the background of strongly pronounced signs of acute respiratory infections (cough, runny nose, conjunctivitis, high temperature) and rains out within 3-4 days. The first elements of the rash appear on the face, upper chest. On the second day, they spread to the body, and on the third, to the upper and lower limbs. It looks like small red spots that tend to merge. Nowadays, it is rare due to the immunization of children as young as 1 year old.

“Sudden exanthema”, “roseola” or “sixth disease.”
It manifests itself in high, up to 39C, temperature for 4-5 days with relatively good health. Then the temperature returns to normal, and a soft pink rash appears all over the body. After the rash appears, the child is not contagious. Very often, this rash is mistaken for an allergic reaction to antipyretic drugs.

Meningococcal disease and meningococcal sepsis are deadly diseases.
It is manifested by a very high temperature, a difficult general condition of the child, which worsens every hour, vomiting, impaired consciousness. Against the background of a high temperature, the child develops a rash (there may be only a few elements), which does not disappear with pressure. If you see such a picture in a child, you should immediately call an ambulance.

In addition to these diseases, a rash on the body occurs with herpes infection – in the form of vesicles, with infectious mononucleosis – with the appointment of antibiotics from the amoxicillin group, with pseudotuberculosis and yersiniosis – like “socks” and “gloves” and many others.

As a rule, a rash with various infections is quite typical and additional laboratory examination is not required to make a diagnosis.

In almost all infectious diseases, in addition to the rash, there is a high (or not very) temperature, general malaise, loss of appetite, chills. You may have a headache, or a throat, or a stomach. Have a runny nose or cough or diarrhea.

In addition to infections, a rash occurs with diseases of the blood or blood vessels. In these cases, the appearance of a rash is provoked by injuries, sometimes very minor. The rash looks like large or small hemorrhages (bruises) and requires additional examination to make an accurate diagnosis.

In conclusion, I would like to once again draw the attention of parents to the fact that they do not need to try to understand what kind of rashes the child has. Call a doctor. And the most important thing is not to paint on this rash with fukortsin, iodine or brilliant green. Once you have satisfied your drawing needs, no doctor will ever guess what was really there.

How to Treat Fever in Childrens – Parents Guide for Helping Them
How to get degree sign on keyboard?